Some recent online discussions, notably this one about Freemasonry, have resonated with a topic I’ve spent a lot of time on: the tides of intellectual fashion in how we think about our place in the Cosmos, and particularly about the traditional “occult” arts.

There’s been a basic disconnect going back to the Classical era, when Plato the Adept and Aristotle the Empiricist ground each other’s gears in Athens. 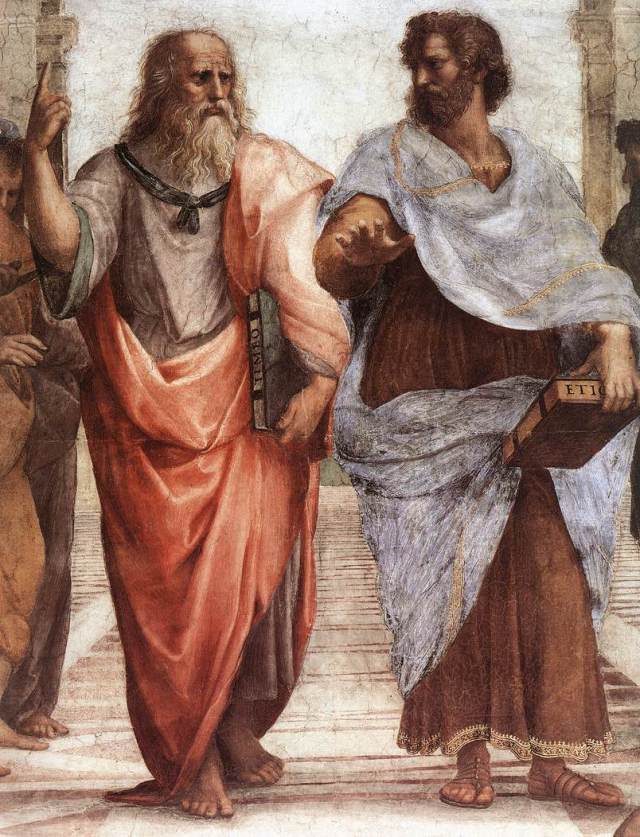 (Detail from “The School of Athens” by Raphael)

“Philosophy is a series of footnotes to Plato,” but of course, there have been many challenging “footnotes,” of which the work of Aristotle was the first. In that challenge, it’s possible to see the outline of many of the later conflicts, which caused shifting tides of opinion which were reflected in major historical events.

Many of the philosophers that modernity knows as Neoplatonists adopted a very sensible compromise with Aristotle: they assigned his work as a qualifying curriculum for those who aspired to learn what the Divine Plato was really teaching. If you could master a certain amount of mathematics, logic, rhetoric, and ethics, then you were ready to engage in dialectic with the professors of Platonism, and maybe have some serious initiations along the way and ultimately have the experience of the Divine for yourself.

If you read the history of the Roman Church, you can see that its tides of dogma and apologetics were also footnotes, with many Church Fathers championing Aristotle, but insistent voices from the wings reminding them that, for all his virtues, Aristotle was, well, earthbound.

The Renaissance came to the West with the rediscovery and translation into Latin of the Platonic dialogues and the Corpus Hermeticum.

This would be about the same time as the first Tarot decks showed up. The popularity of alchemical and mystical emblem books was widespread, as a supplement to more prosaic forms of literature. This in fact explains how the Tarot ended up becoming a book of Hermetic wisdom, when most of the people designing decks were just making artistic follies out of the available material. For more on this fascinating topic, I refer you to Robert M. Place, who I believe has come as close as possible to cracking this particular code.

What this is pointing to is a duality in human thought and experience, between literal and symbolic thinking (what we used to refer to as left-brain vs. right-brain processing, before the brain laterality hypothesis got exploded). This is a dichotomy that produces certain kinds of blindness that tend to poison discourse. There aren’t that many people who are so symbolic-minded that they don’t process literal discourse well, although I have known some. The more common problem is that people get locked into literalism and devalue other modes of thought. This can be seen in religious zealotry, anti-religious zealotry, and scientism.

If you look at the history of the Rosicrucian movement and the subsequent Enlightenment and counter-Enlightenment tendencies1, for example, you can see that the original Rosicrucian literature, influenced by Humanism as well as the likes of Paracelsus, Dee, Kelley, Pico, Fludd, and Ficino, was a corrective to Christian dogmatism that contained a balance of spiritual and empirical elements. This sort of balance apparently isn’t stable, as the spiritual side tends to produce charlatans as prolifically as shaved ram’s horn produces asparagus2, and the empiricist over-correction led by the likes of Comte and Mersenne pushed the Hermetic sciences off the stage for about a century.

The same tendencies are obvious in the history of astrology. For that matter, occultists are still debating whether alchemical literature is just coded spiritual practice, or if there’s value in setting up a lab.

Today, we still need to cultivate our balance, and I see the so-called occult revival as playing an important role in that, at least until we swing too far the other way. We can’t have only Plato or only Aristotle, or only symbolism or only literalism, and remain healthy.

Healer, Celto-Cherokee Pagan, Priest, Frater of the Church of the Hermetic Sciences, sometime writer, astrologer.
View all posts by freemanpresson →
This entry was posted in Reviews. Bookmark the permalink.

8 Responses to Occult or Not?