How About an Illustrated Hardcover Picatrix?

You can still get the the paperback Picatrix on Amazon

, but there is now a hardcover edition of the same thing with a wealth of small (6.5cm x 6.5cm), monochrome talismanic pictures by Nigel Jackson. It’s discounted to $42 for early birds until it goes up on Amazon, at which time it will sell for the $60 it’s easily worth.

Mine arrived earlier today. It’s completely sound and as advertized.

There are other editions, too, including some high-end stuff.

I had been pestering Godine about the re-release of this book for…I won’t say how long (but I’ll show you the video if you want). You see, I have a very peculiar relationship with this book. I was at MIT (where de Santanilla was teaching)  when it was first out. I walked right by a big display of the book at the Tech Coop. I thought, “Oh, that’s the book Jerry Lettvin told me to read. I’ll do that when I have money.”

Today, I am only a bit into chapter II, and this book is already on my desert-island list.

I’m also glad that I read E. M. W. Tillyard’s classic The Elizabethan World Picture first, for confirmation of just how Hermetic the world-view was until well after the time of Shakespeare.

Amazon has a very low price on the book now. Jump on it: Hamlet’s Mill: An Essay Investigating the Origins of Human Knowledge And Its Transmission Through Myth

The Covenant of the Goddess — How to NOT support a movement

[This post is based on, and motivated by, some recent conversations on social media.]

On the 10th of December, The Covenant of the Goddess (CoG) released a statement in support of the #BlackLivesMatter movement. Or, I think they thought they were doing that, but they gutted it until what was left said essentially nothing. Our friend Caer Jones took it apart in detail, and so did the Rock of Eye blog,so I won’t flog the corpse.

So far, the main consequence is the resignation of Crystal Blanton’s coven from CoG, but I’m sure that’s not the only fallout coming.

It’s too bad, too, as CoG has sponsored some very good initiatives in the past. I’m not meaning to ignore those or completely bury the organization.

I considered the case of my own organizations and others I’m most familiar with. They’re mystery schools; they have no real warrant for having positions on the issues of the day. We could have a debate about the values embodied in that stance, but not about the fact that they exist.

From my first involvement in public Paganism, about 15 years ago now, I noticed that there were many assumptions made by some Pagans: Paganism makes everyone politically and socially liberal, Green, sexually experimental, and so on, varying by individual tastes. Many thought that since we have some (barely-definable) core to our Pagan spiritual ways, we should be alike in other ways, too.

It was not true then, and it’s less true now. Pagans come from everywhere on the political grid. We don’t have very much in common beyond the sense of building or rebuilding spiritual frameworks that seem more organic and integrated to us.

Many religions have this characteristic. A few, like the Society of Friends (Quakers) and the Unitarian Universalists, have a commitment to social justice built in to their charters, but most don’t even have that.

It’s not something that can be grafted on, either. So, if you are forming a new coven, magical lodge, grove, or whatever now, you should decide whether it should have a political orientation, by intention. If you have a group small enough to agree on a change, but active enough to matter, add it to your charter. If not…you might want to make your own statements and take your own actions, looking to secular committees for support, instead of wrecking a perfectly good oven because it doesn’t work like a car.

Whatever we do about this needs intention and consensus, otherwise, it will just raise friction that impedes progress.

To be clear: I am not saying this is the way all Pagan organizations are or should be. I know there are a number of Pagan groups that DO have social justice as a built-in objective and mechanism; some of them are out in the streets and otherwise doing active support. Good!

If yours doesn’t work that way, it’s still true that what we do individually is up to us. I will continue to speak out against injustice, and I’m planning an appropriate esoteric response (that’s meant as a word to the Wise; I won’t be saying more publicly).

This is from the I-thought-I-invented-this-until-I-saw-it-in-a-book1 dep’t:

A few years ago, I started doing magical hypnosis work. Right away, I hit on the idea of programming keywords by way of post-hypnotic suggestion. I recently picked this up again, with better technology for self-hypnosis and a couple of books under my belt (Leslie LeCron2 and Adam Eason3).

The set of keywords I use most often and most successfully are:

DOWN — used to get into the flowing relaxation state, just as if I had done a full progressive-relaxation program.

PARAGATE — used from the DOWN state to drop into working trance (WT).

PANORAMA — used from WT to open up visualization (astral light). For me, this often comes in as if I had only my right eye open (when, physically, they are both closed) since that is my “spirit eye” ever since it got baptized with a raindrop.

SUNYATA — used from WT or DOWN to drop into deep meditation.

I have names for my conscious and subconscious minds (my magical name and a pun on GNOW, resp.) which comes in handy for programming and for doing various kinds of offhand magic.

My problem with this is the typical one of finding time to do it when I am not sleepy. A couple of other keywords need to be done for that (SLEEP and WAKE).

Credit for rekindling my interest in using hipgnosis for magic goes to Fr. Thabion of the OTA (Poke Runyon).

1. There’s something very much like it in Jason Augustus Newcomb’s The Book of Magick Power (The New Hermetics Press, 2007) for one.
2. LeCron, Leslie M., Self-Hypnotism: The technique and its use in daily living, Signet 1970 (first edition 1964).
3. Eason, Adam, The Secrets of Self-Hypnosis: Harnessing the power of your unconscious mind, Network 3000 Publishing, 2005. Don’t get on Adam Eason’s mailing list unless you like a LOT of promotional mail.

Tea will never replace coffee entirely for me, but I’ve been finding it spiritually uplifting and less jangling than the bean for afternoon use.

To whom it may concern:

It has come to my attention that some of you people may not have read The Illuminatus! Trilogy by Bob Shea and Robert Anton Wilson

Do us all a big favor and correct this.

If you didn’t immediately think of Pentagram Sam upon reading my opening, follow that link, too.

I know that some of my Magical peeps work with saints. I have two copies of The Little Book of St. Vincent de Paul/Ste.  Louise de Marillac, just little compendia of quotes. Email or DM me a postal address and I’ll send you one.

New review: The High Magic of Talismans and Amulets

My review of Claude Lecouteux’s The High Magic of Talismans and Amulets: Tradition and Craft

is up on Spiral Nature.

“[T]he Faustian current which arose in early modern magick didn’t just appear without help. Apparently, it is as possible to call an egregore into being by constant execration as by constant evocation!”

) that look even better for “close” work. Does anyone else have a favorite inexpensive drawing pen?

Review of The Theban Oracle

My review of The Theban Oracle

I tracked down the first printed mention of the Theban alphabet for your viewing pleasure. This is p. 597 of the 1613 Zetzner edition of Polygraphia by Trithemius and von Glauburg. (the whole book is available on Google Books. There are earlier editions that have not been digitized).

The Latin text below the alphabet refers to the one on the next page, which is the one used in the Golden Dawn Cypher Manuscript

. The text above it means, roughly, “Next is an alphabet from Honorius who was known as the Theban, which magicians used to obscure their follies, as Peter d’Abano said in his major quarto book.”

H. Cornelius Agrippa copied this, but simplified it slightly: “Of this kind of character therefore are those which Peter Apponus [Petrus de Abano] notes, as delivered by Honorius of Thebes, the figures whereof are such, being related to our Alphabet.” (Using the JHP edition from Esoteric Archives.)

No one has been able to find the actual text where Peter d’Abano says anything about this alphabet, though. I suppose that means there’s a very interesting quarto that went missing sometime after ca. 1550. 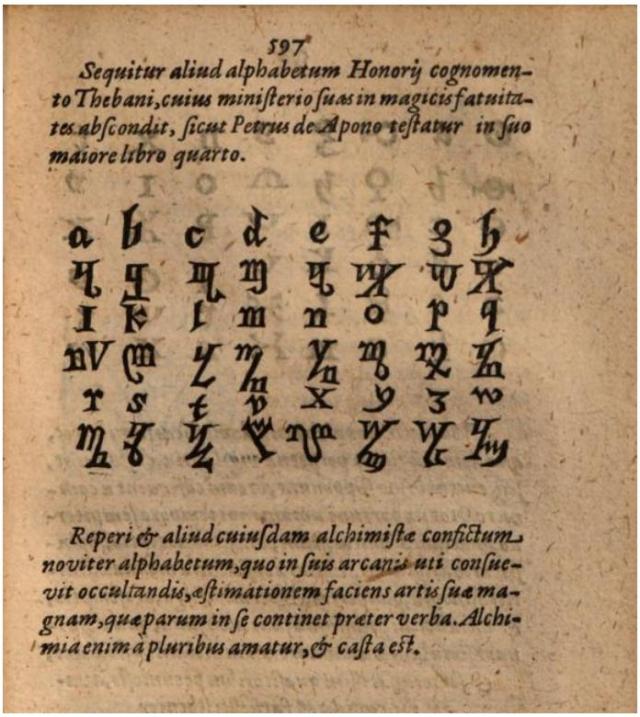 Wait, what? Their follies? Wasn’t Trithemius a magician, too? Well, yes, but not a stupid one; he was writing at a time when one could still get a very unwelcome visit from certain authorities, ones who might not bother you if you were just recording old curiosities that you weren’t actually using.